The Fascinating Life of an Alaska Salmon

Alaska salmon have a most interesting life. One that takes them from the rivers and streams of Alaska's wild frontier, to the high seas of the Pacific Ocean, and back again. In fact, right back to the very place they were born. How they find their way back from the immensity of the Pacific Ocean is a small feat in itself. Not to mention, that they swim from fresh water to salt water and back again.

Starting out as small eggs in a stream bed, they hatch and begin their journey downstream towards the ocean. They spend a couple of years in the streams and rivers growing from small alevin to juvenile smolts. At the mouth of the streams and rivers, the smolts school together and ready themselves for the trip out into the ocean. During this time, their bodies change to adapt to the seawater. The young adult salmon then head out to sea and spend several years swimming in the Bering Sea and the Gulf of Alaska. Once they have fully matured, they will swim back to their original stream or river where they re-adapt to the fresh water and swim back up the stream to reach their spawning grounds. Sometimes this means swimming up rugged rivers with miles of rapids and even waterfalls to leap. Once they get back to their natal stream, they breed and lay their eggs. After spawning they generally die within a week, fertilizing the stream and creating a nutrient-rich environment for the new infant salmon that are about to hatch. 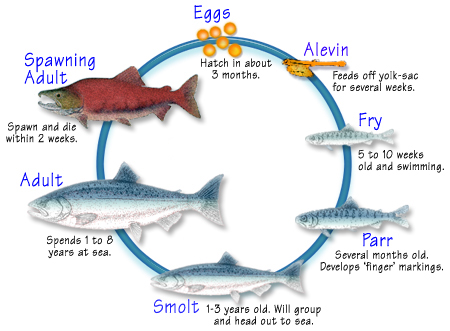 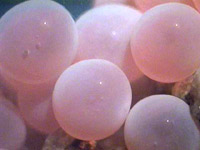 Salmon are born in gravel nests at the bottom of stream and river beds in the form of a slightly translucent eggs about the size of a pencil eraser. The eggs are usually red to pink in color and spherical in shape. During the 2 to 3 month period it take the eggs to hatch, their eyes and other organs can be seen developing through the translucent shell of the egg. 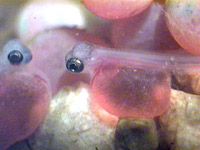 When the salmon egg is ready to hatch, the baby salmon will break free of the egg's soft shell retaining the yolk as a nutrient-rich sac that hangs below it's body. At this stage, they are called Alevin and are about one inch in length. During the next month, the alevin will remain hidden in the gravel nest and feed from the nutrient-rich yolk sac until it is completely absorbed. 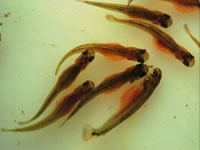 The tiny salmon leave their gravel nest and begin to swim and feed for themselves. At this stage they are called Fry and take the form of tiny fish. It's also at this time that they start their journey downstream. The first part of their journey is a difficult one as the small vulnerable fry must hide under rocks and among vegetation to avoid predators such as birds, insects, and other fish. At the same time, they must find feed to survive. 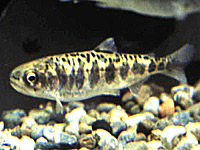 After several months, as the Fry feed and grow, they develop vertical markings on the flanks of their bodies. At this stage they are called Parr and are about six inches in length. Though a bit bigger they still must hide from predators and continue their journey towards the ocean. Parr will continue to feed for 1 to 3 years before they are ready venture out into the ocean. 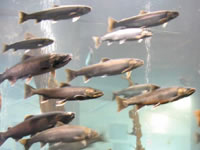 At this point, the juvenile salmon loses its vertical markings on its body and turns silvery in color. Now considered Smolt, they will school together in large groups. It's at this time that the young salmon will adjust their bodies to saltwater, allowing them to swim out into the Pacific Ocean to feed and grow into adult salmon. 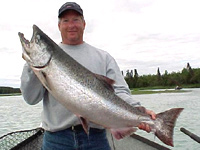 Adult salmon spend 1 to 4 years in the ocean swimming and feeding throughout the Gulf of Alaska and the Bering Sea. They grow to their adult size and develop unique adult markings that are different for all five species of Alaska salmon. There ocean journey is long and hazardous, as they are constantly hunted for by seals, orca whales, and fishermen. After swimming more than 2000 miles throughout the northern Pacific Ocean they return to their original spawning grounds to spawn. In some cases, young adult salmon return early before they have fully grown. These particular salmon are called Jacks or Jennies. 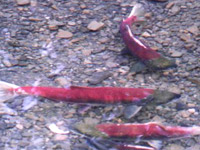 Upon reaching their birth rivers and streams, the adult salmon re -adapt to the fresh water and begin their upstream journey to their natal stream where they were born. At this time, they cease to feed and live on the stores of fat within their bodies. Their upstream journey is a challenging one, swimming upstream against rugged rapids , leaping over rocky waterfalls, traversing fish ladders, avoiding fishermen nets and hooks, and staying clear of hungry bears. When they finally reach their natal stream they have reached sexual maturation and are ready to spawn. The female adult clears a spot in the streambed by sweeping her tail back and forth creating a gravel nest that is referred to as a redd. She will then lay her eggs in this redd and the male adult salmon will fertilize and protect them until both salmon die within a couple of weeks and leave the embryos to fend for themselves.

It is quite obvious that Alaska salmon have interesting lives. One has to admit that a salmon that has returned to its birth stream after years at sea is an admirable fish to say the least. Due to the excellent salmon management practices that now exist in Alaska, salmon populations are well protected. Environmental regulations help protect their spawning grounds while fishing regulations allow for large amounts of spawning salmon to make it to their natal streams. Salmon are studied and managed in "stocks" which are groups of salmon that return and spawn in the same rivers and streams. Currently, in Alaska, the Department of Fish and Game manages over 15,000 salmon streams.